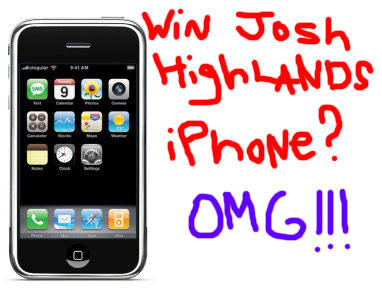 If you know me, you know I love my iPhone. I have had it for a year now, and it’s the best portable device that I have ever owned.

Last week Apple announced that they were going to launch a new iPhone on July 11, 2008. I am going to buy one of these new iPhones. Simple math tell us that if I own an iPhone and buy the iPhone 3G, I will have 2 iPhones, that is why I am giving away my iPhone.

Give away your iPhone? Thats right. my iPhone that I love can become yours. It works great, and has been in a hard protective case since that day I got it. It has served me well.

How to enter of the give away:

on July 11th, after I receive my iPhone 3G, I will randomly pick one of the people following me on twitter as the winner of the contest.

also, let it be known that unlocked iPhones sell for more then $300 on ebay! what are you waiting for, follow me on twitter.com today!

If you have any questions, my email address is:
JoshHighland at gmail dot com