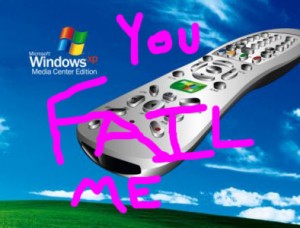 I have blogged about it before, I have a HTPC (home theatre pc) running in my living room, hooked to my TV. I started off with MythTV, but settled on Window Media Center 2005.

When I first built the Media Center machine, I had basic cable, with no DVR, so I let the media center handle all of that. Now I have Verizon FIOS with HD, and one of their HD DVR Boxes, and I rarely use my media center pc, but its always nice to be able to flip the input over to it and watch youtube and browse the web. I also like the fact that I can download all sorts of movies and tv from the darkside of the web and watch them on the tv. That was a huge plus.

For a while now, the Media Center has been acting funny. I built it on a shoe string budget with some questionable parts I had laying around, so I didn’t expect it to live forever. The other day it stopped working all together.

Today I took it apart to see what the problem was. After some investigation, I found the cheap power supply was dead, and it took the mother board/processor with it. FAIL!

Well, here I am at a cross roads. Before it was a matter of software, now I need new hardware. What do you think I should build or buy?

The main things I’m looking for in a HTPC

I’ll blog my research as I go. Lets see what you think I should do.