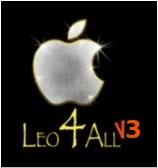 In my last blog post I talked about how my computer had a system drive failure. I am waiting for Western Digital to send me a new 10,000 rpm drive to replace the broken one, so in the meantime, I thought I would screw around with trying to put Mac OS X on my desktop.

My friend Luis Majano is a great software developer and swears by his Mac Book Pro. At work I run Windows XP, at home it Windows Vista. I have Ubuntu on my laptop and run CentOS on my web servers, so I’m not a die hard about one OS or another, they all have their place.

I love Linux operating systems, so learning from Luis that Mac OS X sits on top of BSD made me more interested in switching (Apple don’t tell you that in their cute commercials). The price of Mac computers is insane though, and not something I’m blindly going to jump into.

So to the point… a broken PC a spare harddrive, and the want to try Mac OS X, whats a geek to do? A few google searches, and a torrent download later, I had in hand, Leo4All.

Leo4All is an awesome distribution of the hacked apple OS to run on none genuine apple hardware. They even have a great wiki (http://osx86leo4all.wikidot.com)

I dropped the DVD into my drive, booted up and a few minutes later I was in the OS X installer. Formatted the drive into an apple format, clicked install and 10 minutes later I was working inside of OS X! everything was there, even time machine! check out the screen shot below… 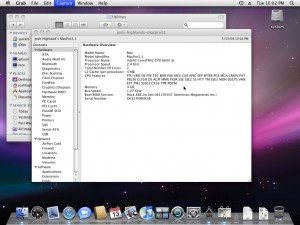 I had trouble with my network card, as OS X doesnt seem to like a lot of on-mother-board devices. I fixed that by powering down, and installing an old pci NIC. Booted back up and it was there!

I had no audio, but after a few minutes of googeling around, and following likes from the Leo4All wiki, I had it going.

I still havent had any luck getting my dual monitors to work. OS X doesnt seem to like nVidia cards with 512 megs of ram. Oh well, one monitor is fine with me for now.

The USB ports work, and recognize my iPod and iPhone just fine.

So it looks like I’m set. If the experience goes well, who knows, I just might become a switcher! If you know of some sweet mac software I need to try out, let me know.

Hey OS X Lion, did you eat my Library folder?

Mac: Rename all files names in a directory to lower case

Mac: Converting a directory of images into JPG files